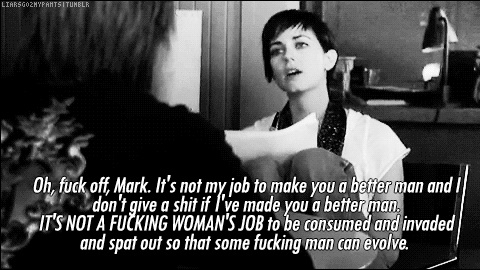 Last night my husband and I were watching the L-Word. We were laying in bed and I all I could think was that every single character was absolutely insane. I had remembered some of them as insane, but this time around I realize that they are all dramatic and weak and basically have issues. I was also amused by the absurdity of every single kiss on the show. Every kiss they show is basically the same kiss, between different characters and in different settings, but it is a slightly rough, passionate kiss with immediate progression to boob grabbing. Here’s the thing. In reality, lesbians have all sorts of different styles of kissing, just like strait-folk, and they don’t usually grab each other’s boobs in public, especially during their first kiss. But, maybe LA lesbians are different?

Anyways, the first time I watched the L-word I identified with Jenny. Absolutely crazy, barely able to function in the real world, and obsessed with writing. The only thing I was missing was some major guilt over my sexuality. This time around I can relate to her, but I definitely do not identify with her. It makes me realize how much I used to identify with my insanity.

I was an insane young adult. I suppose that many people did not realize how deep that issue went because I was also quiet, shy, submissive, eager to please, and basically likable. Even my friends who knew I would go for days without eating (not because of image issues, but because I couldn’t remember that food was important), occasionally cut myself, and stay in bed for days at a time completely frantic in my fears thought it was something cute and manageable. I wasn’t mean. I wasn’t cruel (although at times I was so self-involved that I hurt others). I have no urge to be dominant and no sadistic tendencies, which made me safe. Unfortunately, this meant that I stayed wrapped up in the identity of insanity for much longer than I needed.

Identifying as insane is more than just having aspects of your life that are different. It is beyond having various treatable conditions. It is when you accept the craziness as the basic unit of your self. It got to the point that in my early 20’s I clung desperately to my self-image of insanity. It was all I knew how to be, and if I wasn’t insane then I would be nothing.

Luckily, things have changed for me. In my mid-twenties I moved away from the city. I no longer attended huge, hedonist parties on a weekly basis, and I got out into nature where things were quiet. I took a leadership role. Having other people depend on me made it so I couldn’t sink into despair and anxiety. I am sure aging helped the process as well, as most people have a balancing out of their hormones around age 25. The combination of factors worked, and I slowly unwrapped myself from the identity of insane. That was perhaps the scariest time in my life. Screaming, pinned to the bed by nightmares, or waking up in the hospital was easy compared to the hard, daily work of telling myself that I was still a person even though I was not a dark, twisted creature.

Now I feel like I more or less have it under control. There are times when I just want to sink and dissipate. There was such power in the release of insanity, but for the most part I am happy being in control. I am beginning to build an identity that is so much more than what many people consider a disease. When I watch these insane characters I no longer identify with them. I understand them. I relate to them, but I am not them.

They say an alcoholic is always an alcoholic- always struggling with their relationship to alcohol. It is like that for me with insanity. The relationship will always be there, but it no longer needs to consume me. I, for one, am happy to no longer identify with characters like Jenny. For starters, she was a crappy writer. Who uses eviscerate in every single piece of writing?

0 Replies to “A Never-ending Relationship”