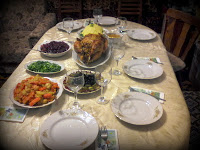 This was the first year that I really made a Thanksgiving dinner. Although I love the idea of ritual and tradition I have never been much for holidays. Thanksgiving has always been another holiday with a murky meaning for me. I would much rather celebrate the ending of harvest, or the beginning of winter than a vague day called Thanksgiving. For many years I was anxious about celebrating the story of the pilgrims. Strangely enough, when I went online this year to find “alternative” ways to celebrate Thanksgiving no one even mentioned the pilgrims. They have long-since dropped out of the holiday and people don’t even remember that fifteen years ago, along with turkey hands, we were making pilgrim hats and tying feathers to our heads for Thanksgiving day plays. Oh well, I like that it has progressed to a general day of thanks, although the irony of black friday nipping at its heels is not lost on me.

When I moved out of my parent’s house I began to celebrate Thanksgiving in true college style. This meant vegetarian meals that concentrated more on pies and alcohol than turkey and gravy. In fact, I had never made a turkey until this year. For some reason, around ten years after my last traditional Thanksgiving, I decided this was the year I would revisit tradition. Perhaps it is because I am married with a kid on the way. Perhaps it is because my Bulgarian in-laws are willing to share so many of their holidays with me. Or maybe it was just because I knew my mother-in-law would be totally awesome at pulling off a full feast, even if the entire menu was new to her. Whatever the reason, I went in at full force.

Living in a foreign country I have learned the fine art of substitution. Bulgarian yogurt is substituted for sour cream. Chopped up bars of chocolate are stand-ins for chocolate chips. But for this meal I wanted to go as authentic as I could. I am happy to say that I did not have to make a single substitution. Of course, this required that everything be made from scratch, as Bulgaria is not famous for having canned pumpkin pie or cranberry sauce. Instead of being overwhelming this just added to the experience. A friend of mine commented the other day on how satisfying it is to make a pie crust from scratch. It is a very physical, creative experience. I agree with her wholeheartedly. I think many people have wandered far away from the creation of food and it was extremely satisfying to make a tasty, decadent feast from scratch. It somehow felt empowering. Overall, though, I was amazed at how easy it was. Whether it was because I waited to make this large dinner until I was thirty and already had plenty of years cooking experience under my belt, or because it really isn’t as hard as people imagine it to be, I was surprised by how few mishaps we had.

Here was our meal:

Turkey. In Bulgaria people tend to use smaller ovens, and since Thanksgiving isn’t a big holiday it was difficult to find a large turkey. For that reason we bought two 7 pound turkeys. We rubbed them with salt, pepper, crushed red pepper, and olive oil I infused with homegrown rosemary. We stuffed them (despite the warnings against stuffing I decided it can’t be as dangerous as they say) and baked one the night before (which ended up as a test-turkey, pre-dinner treat, and let us know a little bit more water in the pan was necessary for gravy) and one the day of. They were both fully cooked, tender, and full of flavor.

Stuffing. I went with a very classic recipe of croutons, celery, onions, spices, and white wine. My mother-in-law baked the bread and toasted the croutons the day before, and the wine was made by my father-in-law. It turned out very satisfying.

Gravy. I used butter, flour, pepper, and the drippings from the second turkey to make a gravy. I was petrified because people are constantly warning of lumps but it cooked fast and tasty without a single lump.

Mashed potatoes. We used bulgarian yogurt, garlic, and butter to mash them and then garnished them with green onions cut from the growing boxes still hanging out our bedroom window.

Cranberry sauce. Unfortunately our cranberry bushes already dropped their fruit, so we had to use dried cranberries. I used a dry peel from a mandarin, red wine (made by my father-in-law) a couple of apples for pectin and a bit of cornstarch to help it set. The dried cranberries plumped fantastically and it was slightly sweet and tart. I have never really liked cranberry sauce from a can so I was hesitant to make this, but I am glad I did as I really enjoyed it.

Macaroni and Cheese. This is where I accepted no substitutes. I know Bulgarians make baked macaroni with sirine. I know it is good. However, I went ahead and splurged on some cheddar. Although no one was particularly impressed with the dish it tasted JUST how I remember it as a kid and was well worth it, to me.

For desert we had apple pie and pumpkin pie. We cut up and boiled the pumpkin, and I blended it with milk and spices to make a super creamy filling. The crust was a basic flour and lard crust, and there was a layer of candied walnuts from the walnut tree out front. The apple pie was topped with a crumble crust that was too sweet for my liking, but my husband seemed to like it.

Was it a lot of work? Yeah, I was in the kitchen for a full day. Was it a lot of fun? Absolutely. Was it worth it? It was more than worth it. Of course, eating the dinner was also a large part of what made it worth it. My mother-in-law set up a great table for the meal, and my brother-in-law and his girlfriend came over. We watched Miracle on 34th Street, dubbed in Bulgarian, and they all seemed to enjoy the movie and there was great conversation. All in all, I would call it a successful tradition.

0 Replies to “Thanksgiving from Scratch”