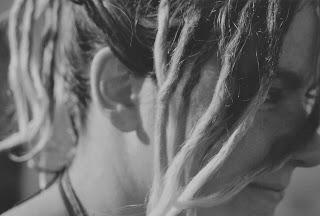 Once upon a time I had dreadlocks. The story of my locks went something like this: On a motorcycle trip across the Western states I stopped in the middle of the rockies to see a lover. He happened to be shaving a mohawk into his girlfriend’s son’s head, and I had just had a disappointing experience based on traditional concepts of beauty at a photo shoot, so I asked him to do mine as well. I spent that summer with a mohawk that changed colors, but hovered between blue and pink most of the time. At the end of the summer I went to Burning Man and ended up bringing a new friend home with me. One night, in our basement apartment on haight street, I asked her to dread my hair. We bought a jar of bedhead wax (Which I STILL have quite a bit of), a metal comb, and a package of small rubber bands. She spent hours backcombing my hair into poofy pink dreads, and at the end I looked like a very disappointed side-show-bob. I then spent the next week freaking out about how hideous my dreads were, and applying wax liberally. Eventually the dreads started to calm down, and to even lock up a bit. I went surfing and snorkeling in the pacific ocean and the salt did wonders for the locks. Then, one day at summer camp my campers got bored and decided that they were going to decorate my hair. They put all sorts of ribbons and string in the dreads, lengthening them down my back. I absolutely loved the look that they created and I started regularly adding bits of different colored yarn to my hair:

For several years I kept the mohawk with dreads going. Sometimes I added yarn. Sometimes I dyed the dreads strange colors. It was quite easy and satisfying to bleach out a dread and add blue, or green, and for the first time in my life I felt like I had control over how my hair looked, and I thought that it looked rather good.

Regarding the question of spirituality and dreads or fashion and dreads I really could not have cared less. Of course dreads only became an option because of the community that I was part of. Within the burning man community dreads were not just an acceptable style, they were often times desirable. I was more or less oblivious though, and so my dreads were more for me than for anyone else. I was also minimally aware of the spirituality connected with dreadlocks:

Eventually I left the bay area, where shaved heads were somewhat sexy, and moved to Arizona where I lacked a roommate to help me shave, and I started applying for more grown up jobs. I started to grow out the hair beneath my dreads to have less of a drastic appearance. When I got my acceptance into peace corps it was stated, rather murkily, that I should attempt to have a more conservative style. Since the tattoos were not going anywhere I decided to compromise by combing out my remaining dreads. Five years later they had still not locked completely, and they combed out. Not easily, but I was able to save most of my hair and did not loose any length.

I loved my dreads, but I did not think that I would do them again. They are a lot of work, and a lot of commitment. However, recently the desire to dread up has been returning and I thought that I should at least look into it. Now the idea of natural dreading (or locks by neglect) is a lot more appealing to me than it was back then. When I first wanted dreadlocks it was an immediate decision and I wanted immediate gratification. After reading some material on the internet today ( http://www.naturaldreads.com/ ) I am much more drawn to the spiritual discipline required to grow natural dreads. I am figuring that with my history and the current length of my hair it will take over three years for me to achieve actual dreads. It is a huge commitment, but undertaking it as a spiritual path rather than just a fashion journey, makes that time commitment much more appealing.

Here are some of the ideas that I gleaned, and hope to consider with the growth of my new dreads: