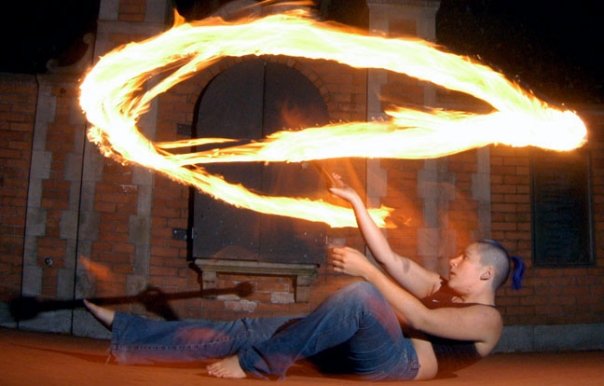 I’ve always had a thing for elemental magic. Even with all the agents crying for books with newer systems of magic, it’s my opinion you can’t go wrong with Earth, Air, Fire, and Water. Watching Avatar The Last Air Bender and Legend of Korra has reawakened a deep, primal appreciation of the elements and elemental magic.

As a teen and young adult, I was unquestionably devoted to the concept of fire. I lived in the desert, basked blissfully in the hottest, stillest heat imaginable. Naturally, I became a fire spinner. Despite enjoying when people watched me spin, (Because deep down I am a shy exhibitionist) for me fire spinning was not a performance art. It was a form of communication and, perhaps more importantly, meditation.

I spun naked for practical reasons: I didn’t want anything to get tangled up in my clothing and burn. But I also did it for purely sensual reasons. When I spun, the flames licked at my skin, kissing me with dry, hot tongues. The roar of the fire mixed with the blinding brightness against a dark void created a cocoon of safety. Within that cocoon everything was still, and my thoughts stopped.

While my fellow spinners cared about tricks , shows, and speed, I spun slowly and cared most about inviting another soul-within-body into a shared sanctuary.

While in my early twenties I met a man at a Burning Man regional who had me completely atwitter for a few months. The two of us had amazing chemistry on the dance floor. His study of capoeria blended well with my modern and there were moments when our bodies tangled and touched in undeniably beautiful sequences. Our shared motion, we both agreed, was exquisite, and we joyfully explored it at every opportunity.

We tried dating, or at least the beginnings of what might have become dating, but something never clicked beyond the physicality of dance. Even the sex, although decent, lacked in comparison.

Looking back, I can pinpoint the moment I should have realized (and maybe did) nothing could grow between us. It was when he explained his obsession with wind. He was one of those slightly hairier guys, with sandy curls covering his deliciously formed calves as well as growing thick on his head. I imagine he enjoyed the way wind lifted the hair from his skin, dancing closer to him than anything else could, and that image turned my stomach.

You see, back then I hated currents. I loved the thickness of humidity but hated breezes. I loved being submerged in water but disliked showers or streams. The idea that this man, who I met with in intimate physical honesty, preferred not just air but moving air over the crispness and sterility of stillness was unimaginable to me. While he passionately described the wind tunnels he constructed for parties, I cringed. It sounded downright painful to my sensitivities.

A lot has changed in the past ten years, though. I stopped fire spinning shortly after moving to Bulgaria. Maybe it was the lack of a community with a shared vision of what it could be, but that had never stopped me before. Whatever the reason, by the time I moved to Turkey I gave away the last of my fire toys, the practice firmly in my past. While I still enjoy the motion of poi, staff, and hoop, I get nothing from the idea of inviting fire in close proximity to my body.

After that, both my body and spirit have gone through many changes. The transition to marriage and especially motherhood has taken me so far out from what I once was that I often have difficulties recognizing the shorelines of my youth. But other factors have been in play, too. The Bulgarian climate, so much different than the Sonoran Desert, Bulgarian language and culture… over eight years the constant slow pressure of these things can create big changes, and they have.

This morning, there was a lovely breeze running down my in-laws’ driveway. It was heavy without being hard and carried with it a delightful teasing of electricity. For not the first time recently, I found myself lifting my arms away from my body, giving the motion full access, and leaning into a shared spin. The sensation was exhilarating in a slow, satisfying way. A deep hum, almost a purr, vibrated within me, and there was the feeling of things being carried away from me, of me being cleansed.It was nothing specific, not a ‘breakthrough’ as much as a new awareness of myself and my positioning in this world.

Lately I’ve been wondering how to reconnect with my spiritual self, which I’ve pretty much shut down since becoming a mother. It was an act of safety and protection, and one of survival. But now I’m ready to ease beyond the physical world again, to connect more deeply with myself and others. I thought the easiest way to do that would be to return to the things that connected me before, but now I realize those moments are gone, and there is plenty to explore in my new self that will connect me through different paths.

Back to this wind-lover I once knew. When I met him, I knew our play was important to me, but back then I was looking for a lover and was slightly crushed that we didn’t work out. Now I think of him occasionally, not as someone I missed out on, but as someone who was important in building the foundation necessary for me to reach the understanding I need ten years later. It’s funny how life works, how something we thought had a simple meaning in a single moment can continue to enrich our lives as long as the memories live in us.

I suppose that’s a roundabout way of explaining that I’ve moved from the magic of fire to that of air. And my husband may actually get me paragliding someday, because people change.

0 Replies to “On Elements and Age”