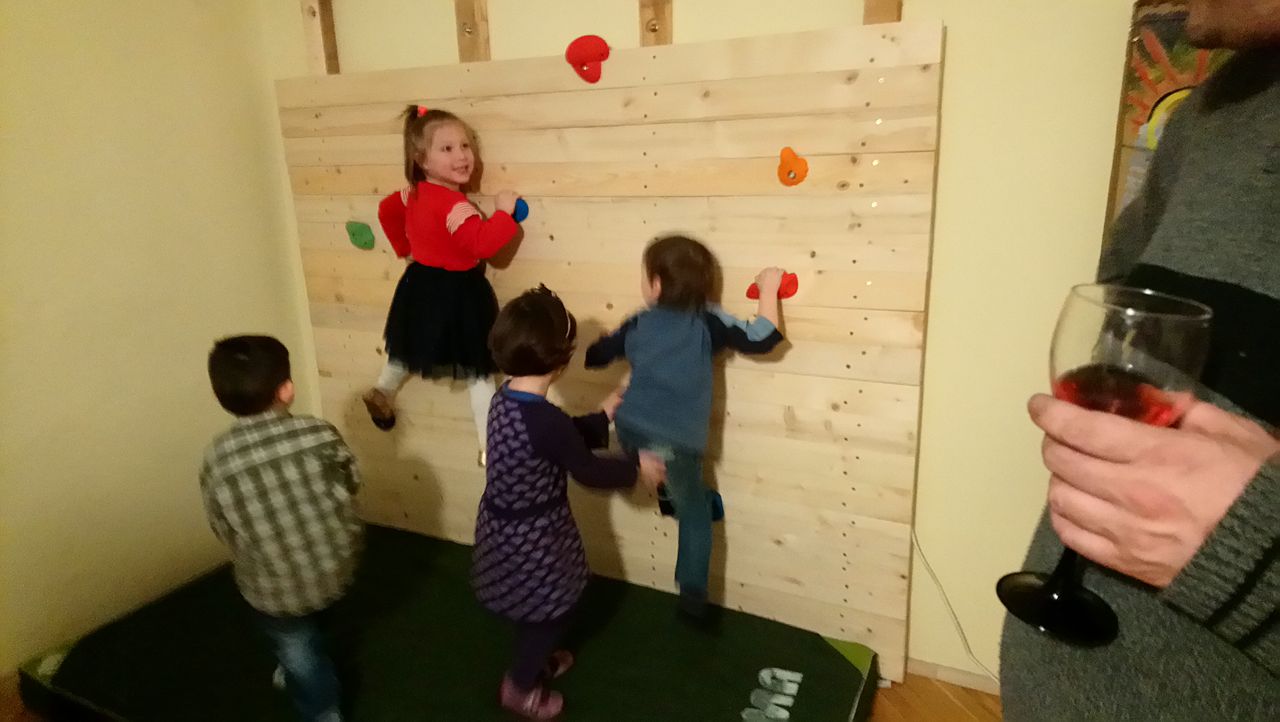 Peatuk turned four on the eighteenth. But we waited until this weekend to throw his birthday party so we could finish his climbing wall. Well, we didn't finish the wall, but we did have a party. Kinda.

This party was far from perfect. On Saturday Nikola was still out hunting down wood for Peatuk's wall, which left me at home with Jojo to party prep. I'm not sure why I didn't take her grocery shopping or do some more intense cleaning/prep, but I didn't. Oh yeah, I was socially exhausted from having both kids home all week and I just wanted some semi-alone time. So I chilled with Jojo, watched a few movies, did light housework and wasted the day.

But Nikola came back late on Saturday, so we couldn't really get started with "the wall." He fed me sushi and we went to bed. How hard can it be to prep a party with only four guests in the morning? We'll build the wall in a couple of hours and then go shopping and have a chill time cooking food and decorating while Peatuk naps.

Oh, how I laugh at my silly self. He's four. I should know better.

Well, the wall ran into some snags, and ended up taking a lot longer than I expected. Luckily one of Nikola's co-workers came over to help so around eleven I was free to go to the store while they continued on the wall. Shopping, which I thought would take fifteen minutes, took about an hour.

I returned home and started making meatballs and mini-quiche, figuring out how I could include Peatuk in the process since it was his party and he wanted to help.

One-o'clock rolls around. Great, I can put Peatuk down for a nap and get to serious prepping.

Nope, the kid refuses to take a nap. At all. I can see the excitement in his eyes. I can feel his defiance. I'm not winning this nap-battle. I give in, even though I know he's going to be a terror during his party.

Three o'clock. I start getting messages that people will be a little later than expected. GREAT! I have more time.

Except my energy is fading, my stress is rising, and I am finding my coping going out the window. It's just a party. Not a big deal. He'll be happy playing with his friends. This becomes my mantra. No time for decorating, the kitchen sink is gross, but most of the food is cooked.

Friends start showing up and it becomes all about kid management. No time for the finishing touches. More friends. A happy little bug, a stressed mother. I decide to let it go. I hadn't showered, I smell slightly ripe, my hair is a bit like frankenstein's monster's, and I don't care. My son is having fun.

The wall gets 3/4 finished around seven. That's enough for today, at least they can more or less give it a go. The kids scramble up the wall. Free to play in Peatuk's room, they pull out all the toys, start building a train city. They play well together. They are happy.

I give up, but in a sort of satisfied way, and drink a glass of rose. I'm happy, too.

But I didn't have time, or energy to take pictures. It was one of those days when I needed all of my strength just to be there for him, and I am happy that I focused on being there rather than taking photos, because photos probably would have pushed me over the edge into, "too much." As it was, it was a fun, albeit stressful party.

It was far from perfect. It was not one of those pinterest parties. But Peatuk is happy. His friends seemed happy.

And, at least some of the parents were chill enough to take photos.

0 Replies to “A Party Without Pictures”