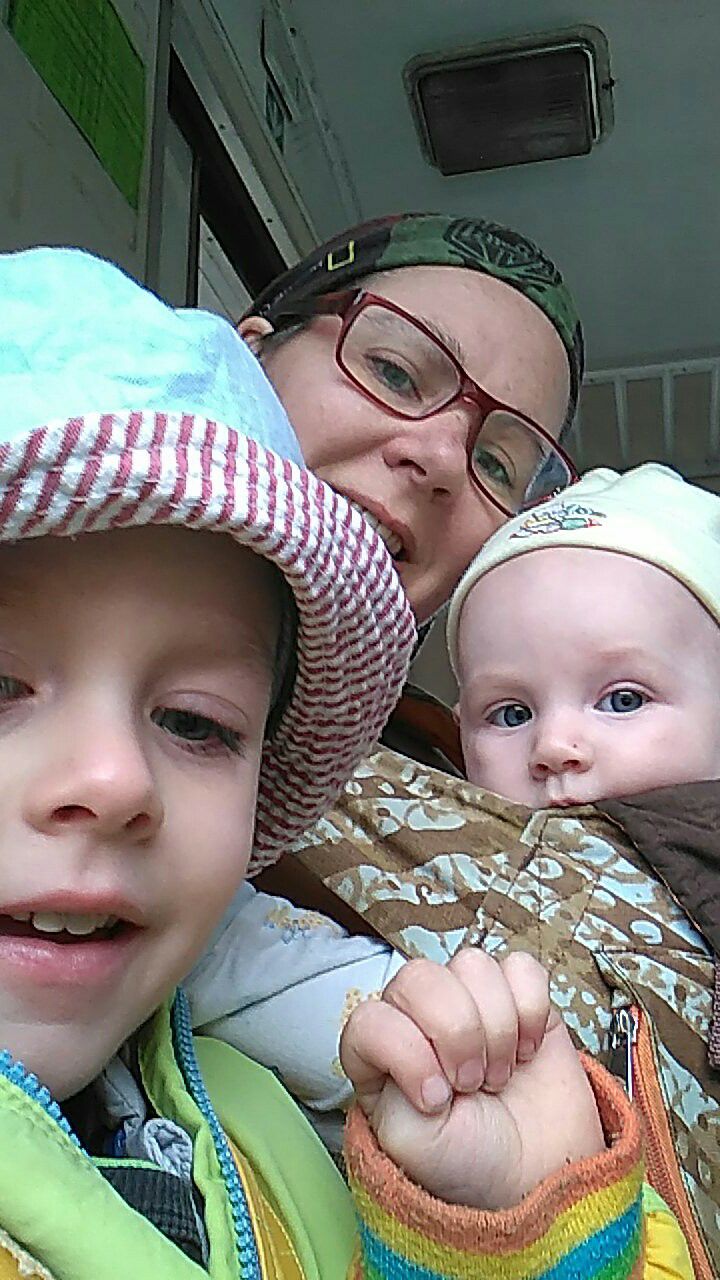 Yesterday I took Jojo on her first train trip. Nikola had gone to Sofia to get the timing belt on our car looked at and he was going to pick us up in Veliko Turnovo on his way to Varna in the evening. That left me to juggle Peatuk and Jojo on two train rides, each about 35 minutes long, to VT. It sounded like a great idea in my head when I thought if up three days ago. After all- Peatuk is getting bigger so he can hop on and off trains by himself and I could carry Jojo in the backpack. A tablet just in case of a kiddo meltdown and everything would be fun. Right? Well, sort of.

Apparently Peatuk has developed a fear of trains recently. That’s right, the boy who was obsessed with trains all through his toddler-hood and fell asleep every night for 6 months listening to the same story about a magical train-ride to the moon is now afraid of trains. I have some inklings of where the fear is coming from. The other day I was trying to get on the bus with Peatuk, a stroller, and Jojo. Needless to say, it was a struggle, and the bus driver closed the doors and almost drove off not once, but twice, with Peatuk on the bus and me and Jojo still on the sidewalk. So he has this fear that we will be separated and he will be stuck alone on whatever public transportation he is on.

But that’s not all! The other day we went on a hike up to Shipka. On the way back everyone was tired and Peatuk had some energy to run out. Nikola let him out of the carrier and Peatuk ran up ahead. Next to the road was a little stream with a concrete barrier, but in some places the ground had washed out and there was a gap between the road and the barrier. Peatuk, running along happily, ran off the road to the barrier. There was a gap just large enough for him to fall into and he slipped down to the stream, falling in a patch of stinging nettle. I had that moment of absolute horror when I saw him slip down, and I can only imagine the fear he felt. Luckily the drop was not much and the gap was not too wide and we were able to scoop him out, but he now has a fear of gaps. So the gap between the train platform and the first step makes him, understandably, nervous.

Our train was due to leave at 6:10, and I made sure we were out of the house by 5:00. There was a bit of arguing in the final minutes of packing, and I surely forgot some things, but I locked the door at 5:00 and we headed down the rain-soaked sidewalk towards the train station. Peatuk was a champ- dressed in his pink-striped pants and black super-hero cape, he was ready for anything. He slowly jumped around and over the puddles on the sidewalk and I tried to breathe and remind myself not to rush him. After all, I had given him time.

At the train station, he was an example of patience and listening. He held my hand. We had a lovely conversation. We sat on the bench and ate dunors and he excitedly threw out the wrappers “all by himself!” Then the moment came to get on the train and things changed.

He became argumentative. He tried to run away. I called Nikola to remind him that we were traveling to meet daddy and offer him some encouragement. But there was no getting him on the train. After chasing him around the platform for five minutes, I scooped him up (trying not to squish Jojo between us) and tossed him on the train steps. He cried and trembled but calmed down once he saw I was on the train. Then he happily found a seat.

The train ride to Tsareva Livada was uneventful. We chatted about trains and lights and tunnels. Jojo got a bit fussy but eventually fell asleep in the backpack. All was going smoothly. Peatuk even got off the train at Tsareva Livada without much fuss.

At Tsareva Livada, there is a 3-way transition. The train from and to Gabrovo comes in on the third line, shortly after the train from VT to Tryavna comes in on the second line, and then the train from Tryavna to VT comes in on the first line. As soon as we got off our train, before we could make it across the platform, the train from VT came in. It rumbled close to us and then the brakes screeched as it stopped. Peatuk started shaking. The screeching continued. He started wailing. Jojo woke up and started crying. The train finally stopped and I was left with two freaked out kids, one of which would not go up and down train steps on his own, and no way to cross the tracks. Finally, a guy at the end of the train who had gotten off to smoke helped us down onto the actual tracks and over to the first platform.

I got Peatuk and Jojo to calm down and then the train to VT came in. It was a little less loud, and by then I knew the best method of getting Peatuk on and off the train was to simply hoist him myself, so getting on was not that big of a deal, although Peatuk was still shaking throughout the whole ordeal.

We got on the train and looked for an empty seat. We found a compartment with an older woman and a young man and decided it would do, so I popped in. It turns out the older woman was one of those with the crazy makeup- bright blue eye shadow, red red lipstick, and visible circles of rouge on her cheeks and she yelled at me for almost toppling her plant that was on the middle of the floor in the compartment. But at least the young man was nice- making eyes at Jojo and asking how we were. Then the young man’s traveling companion came into the train car. He was older, slightly hard of hearing, and I honestly didn’t know what to make of him.

Okay- here’s the honesty, “I’m somewhat of a bad person,” admission. These two men were dark-skinned. I am not sure if they were Roma or Turkish. They seemed to be speaking Turkish, but with enough unrecognizable words that it could have been a blended language. Once upon a time I would not have felt any difference sitting in a compartment with an ethnic Bulgarian man or a Roma man. But now… after seven years of people constantly telling me to be on my guard and spewing hatred/suspicion towards Roma people… after seven years of living in a country where the cultures are completely separate and having almost no interaction with Roma people beyond begging… I have internalized more racism than I thought. Sitting with these two men (the woman soon got off the train), who were just drinking beer and traveling cheerfully, I was on edge. I couldn’t relax. When they offered Peatuk some crackers, I was suspicious. When they put my bag up on the rack for me, I was suspicious. It was an awful feeling to have.

Part of it was that these men seemed to be on a different vibration than me. Just sitting next to them, watching the younger man’s smile, listening to their impassioned speech that I couldn’t understand, I felt like I was getting contact high. It was like those moments of coming up on acid- butterflies in the stomach, the world feeling slightly bigger than normal, a swelling head, and that oh-to-familiar metallic taste in the mouth. Normally, this feeling would excite me. I would want to explore it more. But with two kids, the feeling of being high is terrifying. I want to be in control of everything, and I felt decidedly out of control. I concentrated on breathing and trying to stay coherent.

Jojo was getting really fussy and couldn’t sleep. The older man took a small piece of paper, burned it with a lighter, and, before I could understand what was happening, rubbed it on her forehead, leaving a black smudge. Part of me was like, “What the hell!?! Ask before you touch a baby!” But Jojo quieted immediately and fell asleep in the next five minutes.

“Some people have the evil eye,” he explained to me. He then left to go smoke out of the train door.

The younger guy told me about working in Germany- how he had loved it and wanted to live there permanently. He told me I have beautiful kids. We had a pleasant conversation about nothing.

When our stop came up, the older man took Peatuk’s backpack and led Peatuk by the hand to the front of the train. Peatuk was nervous and thought I was being left behind. He asked about the “nice teacher.” (He had decided the man who helped us at the previous train was a teacher) and I said he wasn’t there, and this man would help us now.

The train stopped, the man helped us off and wished us well. Slowly my head stopped spinning. We went to a bench and ate bananas and waited for Nikola.

Strangers on trains. Sometimes it is the only interaction we will have with certain types of people, and I suppose it is good that we at least have those interactions.

0 Replies to “Strangers On Trains”