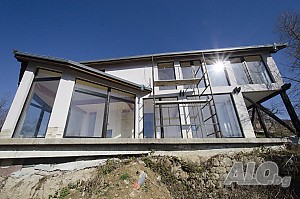 Sometimes I feel like Nikola and I are smack in the middle of the traditional family fairy tale. Of course, I arrived at it in a roundabout way, 10 years after the fairy tale usually starts. After all of my adventures, this one feels quaint and frustratingly slow. At the same time, I have never felt more stable and more happy than I do here, with my husband and son, in our little one-bedroom apartment in Gabrovo, Bulgaria. The conflicting emotions are strange, to say the least, but not altogether bad.

At the moment, our goal is to get Paiyak Development off the ground. Honestly, it is going great. Nikola’s profits are steadily growing. His interns are turning into junior developers that can make great contributions to the company. His clients are more than happy with his work and his client base continues to grow. At the same time, we are working on building a brand that is socially aware and makes a contribution to our community.

All of this comes at a price, though. Nikola is at the office for about 10-11 hours a day, Monday through Friday, and another 6-8 hours on Saturday. All that leaves for us as a family are Sundays. Four days a month that slip away too quickly. When I don’t think 24 hours a day every day would be enough to satiate my desire to cuddle with him and explore with him, how could Sundays possibly be enough?

While I refuse to be the family that always puts works first and ends up miserable slaves to money, I realize that Nikola loves his work and is not unhappy in front of his computer, solving problems. I also realize that this is short term. In a few months, he should be able to scale back his hours a little bit, and within a year we hope that he will be working just over full-time. Until then, Sundays will have to do.

Last Sunday, we decided to test Peatuk’s new bike seat on a longer ride. We were originally going to go to Etera- the classic little water village/museum at the end of town. However, in the morning, I found this interesting looking house for sale in a village about 11 km away from our current apartment:

It is a bit beyond our budget, but architecturally, it is quite different than anything I have seen available in our area, and we were both enamored with the huge windows. We decided to ride up the mountain to see if we could magically find this house and see it in person.

On the way up, I had to stop for several miniature breaks and push my bike up the steeper hills. I realized I have not been this bad at riding in several years. I also realized that without a lot of training, getting a house up in the mountain village, even if it is less than 10km away from the city, would not be doable with the anti-car lifestyle I have created for myself. Besides hauling my baby and groceries up and down the mountain multiple times a week, I could not imagine sending Peatuk down on his own to go to school 5 years from now.

Despite these realizations, I was having an amazing time. The exertion felt incredible. Spending time with Nikola and working towards a common goal felt great. Getting out of the city and taking advantage of the mountains we moved to felt great. I was quite happy.

By the time we got to the top of the mountain, Peatuk had had quite enough of his bike seat. Even though it was t-shirt weather down in the city, it was quite cold up on the mountain, especially with the sun tucked behind clouds. As we climbed, we realized snow was still on the ground, and spring would be coming to these last 5km later than it does in Gabrovo proper.
We tucked Peatuk in for a snack and wandered the (rather dead) village to find our home. It was just as gorgeous as it was in the pictures but, perched precariously on the edge of a mountain, I realized that it would allow no room for a garden and no room for Peatuk to play. No, the house was not for us, and neither was the village.

Still, coming down from our mini adventure, I felt a great sense of accomplishment and bonding with my family. After all, this is what life is really about. Making small achievements together. Creating memories.
Someday, we will buy a house. Someday, we will have a successful business. Someday, we may even be able to take vacations and have grand adventures. Until then, these moments make the wait not only bearable, but incredibly sweet in its own right.