Skip to content Transitions in the East Stories from an American living in Bulgaria
The other day a friend of mine posted this article about Gluten Free food choices. To be perfectly honest my first reaction, without reading the article, was annoyance. Yes, I believe that the Gluten Free “obsession,” that many Americans are displaying is a fad. I also believe that just because it is a fad does not negate that there may be many health benefits to reap from a gluten free or gluten reduced diet for some people. But what annoys me is less of whether the article would be pro or anti gluten free diets and more that people get so riled up over food choices, especially that of other people.

I have many friends back in the U.S. who are studying nutrition or are interested in different aspects of food and nutrition. Because of this I get a constant stream of articles about different diet fads, research, and potential nutritional breakthroughs on my facebook wall. Yes, I know how to block these posts, but for me it is a bit like porn- I know it is not good for me to read it, I know I will probably feel annoyed by it, and yet I cannot help but be curious about it. So I click the links and I read the articles, some of them interesting and thought-provoking, and some of them filled with nothing more than bitterness and judgement. This need to click and read has got me thinking about why I am annoyed with all of the talk about food choices, and to theorize about why so many other people are also annoyed, and often defensive, when food becomes the topic of conversation.

I relate the gluten free debate very closely to the vegetarian debate. Of course there are differences: mainly, the vegetarian debate lacks the disdain caused by “medical necessity,” vs. fad and desire, and the gluten free debate lacks the moral card of “ethical vegetarianism” played so brutally by organizations like PETA. However, they are both ultimately individual (or at most familial/communal) food choices, and yet are debated in a way that people imply others “should” eat the way that they eat. Also, any time the debate comes up in polite conversation half of the room is usually annoyed, or at least tired of the topic altogether.

The obsession with what goes into our bodies is definitely a modern one. Before the modern age many people did not have much of a choice in what they ate. After industrialization the packaging, preservation, and transportation of food made it quite a bit easier to put a million different combinations of food in our bodies at any moment. The flip side of that ease is the Foucaultian idea of measurement and expertise. With the worship of science we find so many different ways to measure and define our foods. We can measure calories, or nutritional content. We weigh ourselves and compare our bodies to different indexes. Most of all what the modern age has brought is a deferral to expertise in all areas, including (or most of all) our health.  A few measurements are thought of as ideal, and people are mostly trying to fit into that idea of perfection even though it was created from a spectrum with many outliers. How this applies to food is that one type of diet will not be appropriate for all people. Some people work better as vegetarians. Some people have no problems digesting the gluten from modern wheat. However, if something works for a large percentage of people, or produces results towards the ideal of scientific health people tend to fetishize it as healthy without necessarily applying it to their own individual circumstances. I think that is what many people are currently doing with the gluten free fad, which is what makes it a fad. I also think some people are doing their research and realistically making changes in their personal lives that work for them (that would be the majority of my foodie friends.) Either way it shouldn’t matter to anyone except them. So, why do so many people get annoyed, or even defensive when they start to explain their food choices?

I think the main reason that our guard is raised as soon as anyone discusses food is due to guilt. Let’s go back to this concept of the expert. From elementary school we are taught different ways of eating “healthy.” This doesn’t take into account our parent’s habits, financial situation, or the ever changing research in the field of nutrition (“Are eggs good for you this year?”). We are teaching eight year olds how to eat ‘properly’ when the average eight year old has almost no control whatsoever over their diet. By the time a person does have control (to some degree) over their diet they have already formed/inherited many “bad” habits. Not to mention that eating in modern times is about so much more than just nutrition. It is about socializing, comfort, experience, and status at least. This makes it extremely difficult to “eat right” even though most of us have been basically educated about healthy diets. However, even if you dedicate yourself to eating right the amount of conflicting information can be overwhelming and absolutely frustrating so even if you are trying to do what the experts say is right you will inevitably fail. This adds up to a lot of guilt over our food choices and our failure to be healthy. Okay, maybe it is not guilt in everyone. Maybe for some people it is more of an irritation or annoyance or frustration. Whatever it is we are surrounded by the message that there IS a right way to eat, and whatever we do we are NOT doing it. (Which we can’t, because honestly there isn’t actually one magical way of eating right.) Because of this internalized sensitivity to being told that we are failures at eating we become defensive. So, when one of our friends starts telling us about something that worked for them, we hear what we are accustomed to hearing- that we are doing it wrong.

What our friend says:
“I am a vegetarian. It has been really great for me and I feel less depressed than I felt when I was eating meat.”

What we hear:
“You don’t think about what you put in your body. The meat you are eating is making you depressed. You fail.”

What our friend says:
“I think that I am going to try going gluten free. I hear that a lot of people who stop eating gluten feel more energetic and have an easier time digesting their food.”

What we hear:
“Why would you ever put gluten in your body? I judge you. Everyone else can figure out how to eat right but you are too weak to give up your habits. You should do this too.”

Okay, maybe that is a bit extreme. I know plenty of people who are a bit quick to give advice concerning other people’s diets. But the fact is that most of my friends are excited about their own food adventure in life, and want to share their experiences. They are not (usually) on a crusade to change or judge others. A lot of that judgement and preachiness that we feel is actually imagined and internalized by a vague food culture filled with guilt and a lack of real discussions about food culture instead of simple food myths and “expert” advice.

I have been guilty of judging others on their eating habits. I have also been guilty of thinking others were judging me when they probably weren’t. Sometimes there really were, though. This is why nutrition demands a holistic, cultural approach rather than the facts and figures that we “taught” our 8-year olds twenty years ago, and I love that some of my more aware friends are getting into this field.

And here’s a picture of yummy food: 🙂 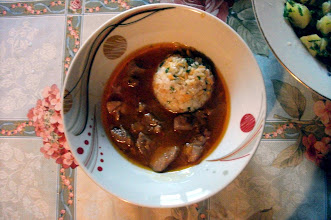