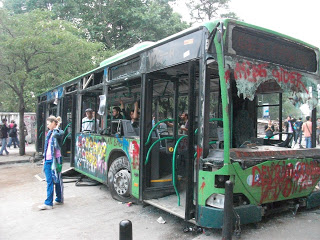 It should feel differently.


As I walked down Istiklal Street, crowded for a Wednesday evening, the words floated into my head, more of a concept than a thought of my own. At that moment I had a small epiphany- a moment of understanding regarding the three months of resistance and social movements that I had been studying. Resistance shouldn’t FEEL any different. In fact, it shouldn’t feel at all. Resistance simply is. The torn up streets are not excited. The graffiti on the buildings does not move. It is people who must make a constant effort to feel. It is not the excitement of resistance which breathes life into people, but the emotions of people which laces resistance with excitement.

Everyone that I talked to, on Friday, on Saturday, even on Monday, was excited about the protests spreading from Istanbul to the furthest reaches of Turkey. Not one of them thought that anything in Turkey would actually change, but they were excited to be part of something, and to express themselves (many for the first time) in the political arena. But after a week of protesting things began to change. The police violence stopped- Taksim square had been taken- and with the uneasy peace that settled in Istanbul people began to lose the excitement that they had expressed the week before. The resistance had taken on the feel of a festival. Music, speeches, workshops. My friends wanted to act. As one put it, “I need to be there. Nothing will change, but I need to yell and scream and throw things.” Another told me that things had changed, and now it was just a festival, with people drinking and no more resistance. When that excitement is taken away, when the rolling wave of indignation is taken away, when the physical form of police officers is extracted and you have nothing left to push against, then how can you continue to resist? I wondered how long the protests would continue, certain that people would trickle off, back to their jobs and their homes, and the moment of resistance would be forgotten.

For most of my adult life I have valued social movement over acts of resistance. I thought I was quite logical, asking what the point was in constantly acting to deconstruct something without building something to take its place. Before I even knew who Gramsci was, I was a solid supporter of counter-hegemony as the only viable path towards revolution or, as my peaceful mind liked to put it, “change.” When the protests began in Istanbul, grew, and turned into forceful physical conflict, I was skeptical more than impressed. What’s the point in destroying a city? It was easy, as an outsider, for me to dismiss the people participating in the protests as a bunch of boys who just wanted to be a part of something, anything, violent and had very little political motivation. Seeing the destruction in Taksim- graffiti as high as the hands could reach, sidewalks torn up, buses and cars overturned and burnt out, I was not impressed. As I walked by the two buses blocking the entrance to Gezi Park and watched two young teenage boys, masked with the face of Guy Fawkes, climb victoriously on top for pictures my first reaction was awe, but my first thought was that the very people who destroyed these buses would be the same ones grumbling about the lack of adequate public transit in Istanbul during rush hour within the next month. I watched countless people approach the men selling aspiration masks and swim goggles for 5tl a piece, and wondered if they expected it to turn violent again, or if they were just purchasing souvenirs- a fashion statement to say that they were there. I couldn’t help but be sadly amused at the irony of defacing one of the seats of consumerism in Istanbul, while protesting the turning of a public space into a capitalistic private space, and at the same time participating in a replacement capitalism without a second thought.

What changed my mind didn’t take place in Taksim of Besiktas. It wasn’t at ground zero. It had happened on Saturday evening, in my neighborhood seven kilometers away from the protests. Friday and Saturday my husband and I kept a close watch on twitter and facebook, overloading google-translate in the hopes of understanding the protests. We kept our windows open to hear and see signs of the protests, most shocked by the number of planes lined up to land at Ataturk airport with, what we rightly assumed, was police support from Ankara. Around eleven on Saturday evening the banging of pots and pans began. It echoed up and down my neighborhood, over and through, then back again. I poked my head out the window of my fourth floor apartment and for the first time I saw my neighbor, a young woman about my age, also looking out with curiosity. Until that moment I had not even realized that I had a neighbor living in the room that shared a wall with mine. Her apartment entrance was on a different street, and I had never seen her. We looked at each other, smiled shyly, and then quickly darted our heads back in. Throughout the evening we saw each other peeking out several more times. At one point the rumbling of pots and pans grew louder. I looked down and saw about 25 women walking up my street. In a neighborhood where there were no protests and no police these women had joined together, going from nowhere and to nowhere, simply to express themselves. It was the one moment during the night that I could not hold my composure, and a few tears slipped out in support of these women, some with bare heads, and some wrapped in scarves.

So when my friends lament the festival atmosphere in Gezi Park and fear that they have missed the revolution, I have to say that it’s unfortunate, because this is the moment of resistance that excites me. Now that the park has been ‘secured’ by the protesters there exists a platform. That platform hosts academic workshops, political speeches, and cultural performances. At the moment intellectuals are trying to create some sense of coherency in the park, and they may succeed or they may fail, but what is important is that people are out of their houses, connecting with one another. The benefit of the platform is not only in its potential to create cohesion, but in its ability to accommodate expression. It is that expression that has finally made me appreciate resistance in and of itself, apart from creation, movement, and change. Sometimes people really do need to be part of something. I can’t help but thinking that it is no fault of the streets or collection of workshops at the park if nothing changes. The change starts with a very simple inward realization, not ‘it,’ but:

We should feel differently.

0 Replies to “Romancing Resistance: Reflections on Istanbul Protests in 2013”