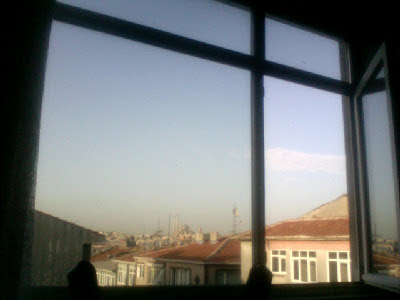 Above you will see a poor-quality snapshot taken with my webcam from my bedroom window. We are on the fourth floor, up above the buildings, in a little bit of openness that can be difficult to find in the city. From my window I have a view of red rooftops, data-dishes, and off in the distance one of the larger mosques. But the vision doesn’t capture it. From my window I also have a great basin of sound that echoes off of the closely positioned buildings and strait into my ears: the shouting voices of little boys (one of them scored five this morning, that much I understood), a slightly more subdued monotone of older men, bicycle bells, car engines/horns, radios playing both Turkish and Western music, laughter, screaming babies, whistles, footsteps, a ball bouncing on the street… after awhile it becomes more of a soup than any of those distinct sounds and I rarely notice an individual unless they are particularly persistant. The amount of sound, layered together and unending, seems to contradict the peaceful blue sky that greets me.

This has been something that I have been trying to understand since I moved to Istanbul. The vastness of this city. It permeates every hill and seems to extend on forever. There are brief respites of trees and parks, but really it grows directly into both seas, and I am amazed that it has not expanded over the channel. It expands to the sides for as long as my bike can carry me, and up so many sets of winding stairs. It is huge.

I wonder why people want to live in cities. I wonder why I wanted to live in a city. I suppose that we hear stories about cities and we romanticize them. San Francisco is not just a city but an entire lifestyle and ideology. It is the same with any other large and famous city. People flock to LA, New York, Paris, London, Istanbul… not really because of opportunity, but to rub up against everything that the cities claim to be. I think it is a disease of youth, to want to live in these cities, or maybe it is okay for a single person. As a married person looking towards children I can’t imagine staying here any longer. The bouncing of the balls sounds so very out of place that it breaks my heart. Their little shoes running around on pavement. Do they know how grass feels? Have they climbed a tree? The city is not the place for children. And if it is not good enough for our children, really, is the city a place for people at all? What do we gain by living on top of each other? Access to bad pizza delivered at 3am because we can’t sleep due to all of the stress and artificial life? Probably not worth it.

0 Replies to “An Endless City”