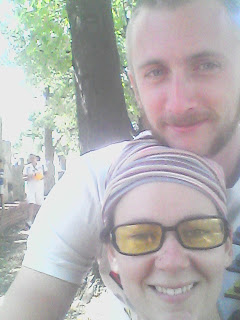 I have long been the type of girl who thought that she was never going to get married. No, not one of those desperate, forever-alone girls stuck on self-pity and thirsting for a man, but more of one of the girls who just never quite got the point of marriage. I have seen too much divorce to really take marriage seriously, and I do not think that it is right for the state to monitor what is or is not a family based on religion. On my 13th birthday I vehemently disavowed marriage, promising my father that he could look forward to having an unwed daughter forever. Over the years I have been a bridesmaid and a groomsman, in weddings to celebrate unions that have now been dissolved, and both times I felt a little cheated by the whole ordeal. (I know, it is selfish. I am sure that what the bride and groom felt was much more significant than what I felt, but if I believe in marriage, and if I believe in a wedding, then it is a moment when you ask the support of your family and friends for your union, and make a promise not only to your significant other, but also to them. The promise to your sweetheart that you will be forever theirs can easily be made in bed, and sealed with a kiss. The rings and ceremony is for the social seal of the marriage.) So, all in all it was easier to forego the idea of marriage and just live each moment how I saw best, in a very selfish, self-defined, egotistical way. I was quite happy that way.

So, why the change in theory?

Well, first of all over the past couple of years there has been a change in my heart. Not only have I finally settled the restlessness that drove me as a young adult, but I have also gained more respect for the social world. Five years ago I was determined to go through this world alone. I was an island. Now I have a much deeper understanding of community and friendship. I still don’t have much respect for religion or the state, but I can see the need for the support of friends and family when you choose to be together with one person for the rest of your life. I think that some of this is due to the natural aging process, but most of it is due to my peace corps experience… seeing the way other families live; both American and Bulgarian.

Secondly, I have honestly never felt about any one else the way that I feel about Nikola. I thought that I knew love, and I did. I knew all sorts of love. But with him I also know this huge, unbeatable trust, and the depth of it is unbelievable. I am pretty much drunk on trust these days. Trust and acceptance. It is wonderful. For that reason, I would never let him go, and also, I happily want the entire world to know that we are together, side by side.

So, one morning we woke up and were talking about when we would get married. There was no proposal. We both just knew that we would get married. Conversations about immigration and residence permits and our landlord only renting to married couples had already helped to plant the idea within us. Two years from now, next summer, and then, suddenly, why wait? We decided that we will get married this winter. I know that it is quick for a lot of people. We have been dating for three months. When we get married it will have been six. It isn’t much time. But I think that we are both the type of people that once a decision is made there is no going back and forth, trying to decide if it is right or not. It just is.

I don’t think either of us really have a clue about how to get married. There are so many traditions that we first have to learn (as our experience is quite limited) and then cut through to get what we really want our wedding and marriage to be about. I think this is going to be a very fun three months, followed by a very fun party, followed by a very fun lifetime with the most incredible, inspirational person that I have ever had the pleasure of knowing.

0 Replies to “In defense of marriage…”