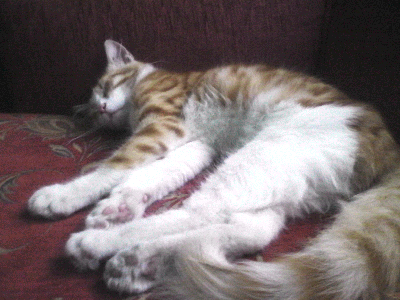 So I thought that I would take a few moments this morning and write a bit about my newest love. (No, I am giving the blog a break from writing about Nikola… this little guy is newer and slightly more furry.) :

The hostel that I am living and working at is called, “Stray Cat Hostel.” I think the name is very appropriate, especially this month as it is filled with the lost little kittens of erasmus who are desperately looking for accommodation for their coming semester or years. The hostel has three cats that actually belong to it: one who just had kittens, one I haven’t seen, and one that I have fallen in love with and want to talk about.

He doesn’t really have a name. His name was Sofi when a hostel worker found him on the street and insisted that he was a girl. It stayed that way until last week when the creative little guy participated in some sort of adventure that none of us will ever piece together and broke his leg. Sedat took him to a vet who informed him that a) the cat was too small to do anything for the leg, and b) the cat was a boy. At that moment two very interesting things happened to the cat. A) He was confined to a box to encourage him to stop running, jumping and playing and B) His name was stripped from him.

Well, now I am calling him Houdini, because we have learned that he is quite a determined kitten that will get out of any type of box or cat-crate that we put him in. This guy loves to be out and about. He needs constant interaction and human affection. He also needs adventures. He is absolutely perfect for the hostel setting and several of the guests have fallen in love with him as we have nursed him back to health. Over the past 10 days I have grown to respect Houdini very much. I feel that there is so much that I could learn from him.

Houdini refused to rest with his broken leg. He kept walking, and jumping off of couches or out of boxes. For those of us trying to get him to rest his leg it was terrifying, but he was not about to give up using his broken leg. He exhausted himself as much as possible and then found a lap or couch to curl up in and slept completely, peacefully. When he woke up he was at it again. It did not matter that his leg was broken, and it did not matter that we were trying to get him to rest. He was determined to live his quality of life the way that he had always known. In the end this exercise actually worked and now he is barely limping, and able to safely jump up and down! (Only 10 days after the vet said that there was a good possibility that his leg would be paralyzed for his life.) I wonder if it did any good to try and stop him. Animals know their bodies and the healing process a lot more thoroughly than humans do. Perhaps the next time I am faced with that much insistance I will just trust the animal to heal itself to the extent that it can, and take that as the fate of the animal.

Houdini is a cuddle-slut. He will come to anyone, look up with those kittenish eyes, open that tiny kittenish mouth, and insist to be picked up and petted. I have not seen anyone with the power to resist him yet. He states his needs both vocally and physically. It is very obvious when he wants to be petted and when he wants to be fed, and when he wants let out. I think that is a trait that people are happy to embrace: stating your needs in an unobtrusive, yet firm and clear way. It is funny that I learn this from a creature that can not even speak.

When Houdini needs to rest he really rests. He passes out, completely unaware of the world, and goes deep within himself. He stretches and curls his body and really seems to be enjoying his life. If he chooses your lap to rest on then you get a contented purr running over your thighs and you know that he is one happy kitty.

So, I think of all the strays that I have come across in this hostel, Houdini is by far my favorite. Unfortunately I am in no position to adopt a kitten at the moment, but hopefully I get to stay his friend for many months.

0 Replies to “Learning from cats”