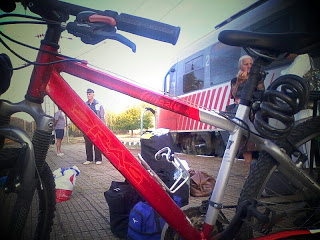 I originally intended to come to Turkey at the beginning of September. I thought that I would take a train over on the first, and spend ten lazy days doing nothing until I had to register for school. Having a single lazy day this morning I realize that it was a terrible decision, and I am lucky that my friends had to bump our vacation forward and I stayed in Bulgaria to the fullest extent of my possibility.

Last week we completed part II of our Black Sea adventure on bikes. It started last year, surely imagined over beers in the bylato or the firehouse, and taken too seriously by Maria and myself. I enjoy people who take ideas too seriously; those who think that thoughts and ideas are silly in themselves and actually turn them into experiences. For the most part I think that has been why Maria and I have gotten along over the past two years. We talk less and do more than those around us. Anyways, I wander in my thoughts. Last year was 10 days from Bourgas to the Turkish border, and it was lovely. Three of us went together, with no experience between us, and came out the other side feeling cranky, tired, sun-weathered, and overall happy. Of course we needed to repeat the adventure. So, this year we grabbed another friend and we went north.

I felt much less connection with the sea this year. In the south we rode for a little way each morning, through the woods, and in the afternoon we drank beer and laid on the beach. Every morning we repeated the ritual of coffee and breaking camp. It felt like we had forever down there, and I was quite happy. This year we spent much more time on our bikes, going less distance. I think that this was mainly due to the cooler weather, the wind, and the lack of cover. We were exposed the entire time, and it wore on me. I wanted to go further, faster, and overall  I could just not admit that I wanted it to go on longer.

Many times during the week I found myself irritated, and thinking that it didn’t matter. The irritation mattered as little as the individual pleasures. Everything would weigh together in the end and in 5 years I will not remember the time that maria said this, or eva said that, or gigi pulled a leroy jenkins. I will only remember that one summer I went on a trip along the northern coast of the bulgarian black sea. It will be positive, because it was an experience, and so I surrendered to the pull of averages and tried to let go of my taut emotions.

The trip started with a failure. I left my lover’s bed at 5 in the morning to take the train from varna and meet up with my fellow riders. Unfortunately, the train broke down 1 stop away from our connection to the north, adding 2 hours and a disproportional amount of exhaustion to the first day of our trip.

After riding for two hours on a weirdly open but pleasant road we came upon this very communist-era statue, overlooking nothing. By nothing I mean absolutely nothing. A bit of grass, but mostly turned fields of dirt. It was queer and classic for me, but I quickly learned that my fascination in communist style sculptures does not echo at all in my modern Bulgarian friends.

And then, over the hill, there was the sea. We spent two evenings camping at cosmos, although one would have been plenty. However, the first sight of it was a beautiful reward for the year.

The second day we continued on to Shabla and Tulenovo, which was gorgeous. There was a perfect cave to camp in, a fire to be had, a new friend to meet, and falling stars to watch. The moon was huge and orange and everything was quiet and perfect. I think that it was my favorite night.

And a favorite night was followed by a favorite day. We went to the nature reserve, “qlata.” There was some serenity that seeped from that place and I wanted to sit there and meditate for hours. In a moment I realized the importance of ritual (I am older now and so really I remembered the earlier realization) and I decided that I need to form rituals. I have been floating without rituals for way too long.

The last two days flew by, and I actually ended up leaving our company early, just to get some actual beach time and a last night in a bed with my boy.

Overall the trip was not bad, but it was not spectacular. I was constantly gnawed by the thought that in the states burning man was happening. I am not even sure that I would still want to go, but I kept thinking that every vacation is like burning man. We look for the creative parts of society, the beautiful parts of nature, and strive to make connections with people. Actually, that is not vacation as much as it is life, I suppose.

0 Replies to “A Meta-Vacation along the Black Sea”